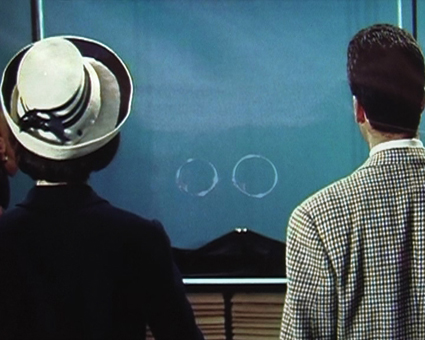 What else could this pavilion for Cyprus represent other than something of the risk entailed in art that raises doubt as to the truths in the representations of our culture. Especially when our only reward might be to arrive at less secure ways of encountering this culture. It’s a gesture in the right direction to go Nietzsche’s interest in the very making of work as a risk, and that it be driven by interest as opposed to say, the disinterestedness of Kant. Consider the ramifications of our time that Agamben has lamented and warned us against, when he states, only because art has left the sphere of interest to become merely interesting do we [now] welcome it so warmly.

The works of Haris Epaminonda and Mustafa Hulusi presented in the Cyprus Pavilion show what might be at stake in the manipulation and circulation of images in a culture – and in Cyprus in particular all the while being possessed of them. Epaminonda for example speaks of her work as losing a sense of authorship loosening thought. They question how to propose meanings, or to construct a new scen that is not compromised by the absorption of the failures of modernity, born of the fantasies of the enlightenment, and the international diplomacy that has trailed in its wake, to leave Cyprus as a divided country.

Hulusi’s large scale, meticulous, technicolour, photo-realist paintings of flora and fruit indigenous to Cyprus form an assemblage and, as in his earlier works, they risk their existence in the territory between estrangement and enchantment. A Turkish Cypriot, – part of the Diaspora born in London – over the past two years he has exhibited work based on his photographs from Cyprus and to this he returns. Titled ‘The Elysian Paintings’ his photographs are painted in collaboration with a professional illustrator, with a palimpsest of references: the faint trace of the bucolic ideal in Chinese political propaganda posters and the remnants of kitsch. Their luminous surfaces show a less solid flesh than we expect to find in this world. In a poster of 2004 he appropriated a photographic portrait of British Prime-Minister Tony Blair with Mustafa Hulusi stretching the width of the image the very imposition of his name showing its unbelonging. The title of his work in Venice mimics, of course, The Elysian Fields, the island of the after-life, yet Hulusi’s field is of this earth. As he has said he wishes to have his intentions questioned. The Lebanese writer Jalal Toufic speaks of the value of the one who produces work in relation to a place when one is not there. Hulusi is both there and not there, and his journey a return to produce these luminous presences, these paintings that also say something of the presencing that all borders generate.

Epaminonda’s set of videos, collages and photographs are a series of mediations on image and sense in a chain of associations in relation to time – an encounter with the vicissitudes of memory, and history. Accessing TV broadcast archives in Cyprus, her work includes a return to the transmissions on Cypriot television since the late 1950s. Whether the symptomatic soaps or the news broadcasts and films, they hold the breaches in memory.

Her previous collages are occlusions, agitated, temporary stoppages of vision and by implication, speech. They are escoriating, beautiful works that give a dark twist to her sources. Taking fragments from French magazines from the 1950s, they are not additional, they are cut into, refusing the teleology of history, and hold us on the cusp of another time. She spatialises time, as Walter Benjamin would say, so that we can get our hands on it. Her earlier video works from 2005, filmed off TV screens, both in Cyprus and the region of the Eastern Mediterranean, are a montage of moments overlaid, slowed down. So that in Tarahi II for example, the affect of a woma’s gaze the figure of woman re-occurs in her work is occluded, as if withdrawing from the symptomatic utterances of the soap opera. In the film Barka a face in a still photograph, already immersed by a sound track, is cut into by the film frame itself to breach the image, with film of a small empty boat adrift on a dark sea. Her work in the pavilion continues from this breach – between one archive and another – in a strange and timely twist on modernism’s fascinations.

Haris Epaminonda (b.1980, Nicosia) lives and works in Berlin. She works in a variety of media from collage to film, installation and sculpture. She was educated at the Royal College of Art, Kingston University, and Chelsea College of Art & Design, and she has since gone on to exhibit at major art centres such as Tate Modern, MoMA, Malmö Konsthall and dOCUMENTA(13). She has participated in residencies such as the Künstlerhaus Bethanien in Berlin with the support of the UNDO Foundation, Nicosia, and has been nominated for the ‘Preis der Nationalgalerie für junge Kunst’ in Germany. Epaminonda represented Cyprus at the 52nd Venice Biennale of Art together with artist Mustafa Hulusi.

Mustafa Hulusi (b. 1971, London) lives and works in London. He studied Fine Arts and Critical Studies at Goldsmiths College and continued his studies on photography at the Royal College of Art. Hulusi’s work moves within the territory of, as the artist claims “the growing estrangement from the dominant socio-political ideology governing artists which has often led to an introspective and escapist mental space, a re-enchanted artistic space that counters the disenchantment of social and cultural life today.” His works are included in prominent international collections including Pinault Collection and Tate Collection. Hulusi represented Cyprus at the 52nd Venice Biennale of Art together with artist Haris Epaminonda.